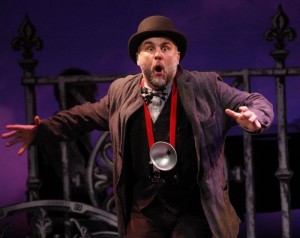 The cast of Ionescopade will reunite for a one night concert version of the show, to be presented at the York Theatre on August 15th. The following week we will be recording an original cast album.  Very exciting. Although, aside from some mandolin playing, I’m not certain how prominently my completely mute character will be featured on the album itself.  Never the less, I’m thrilled that this quirky little show will leave behind some sort of record for posterity.