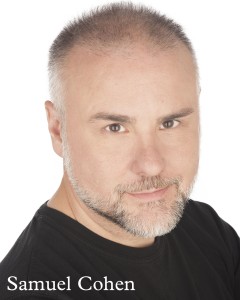 Hi. My name is Samuel Cohen and I am an actor, musician and director who lives and works in New York City.  New York audiences have most recently seen me onstage as Mikeen Flynn in Irish Repertory Theatre’s “Donnybrook”, and as Seabon in their production of “A Christmas Memory”.  I also appeared as DA in the Tony Award winning musical “Once”. Off Broadway highlights include performances as The Little Man in “Ionescopade”, Johnny in “The Portable Pioneer & Prairie Show,” Jud in “Cotton Patch Gospel”, Yussle in “Yiddle With A Fiddle”, and Elyakum in “The Witch”. Regionally, I have toured as Serge in Arkansas Repertory Theatre’s production of “ART”. Other regional work includes performances with Alabama Shakespeare Festival, Cleveland Play House, Capital Repertory Theatre, The Riverside Theatre, Forestburgh Playhouse, West Virginia Public Theatre, Depot Theatre, and the American Heartland Theatre. I am also one of the creators of “The Next Big Broadway Musical”, New York City’s original MAC Award winning fully improvised musical comedy.  I’ve trained at Carnegie Mellon University, Penn State University and the Pennsylvania Governor’s School for the Arts.